March 8th marks not one, but TWO important dates: International Women’s Day and my MIA birthday – my 3 year anniversary with MIA! This particular year, considering the politics of women the world over, participation in the protests was impressive. There were marches in the U.S., where women wore red to illustrate anti-Trump solidarity; marches in development and lesser developed nations around the world; protests and marches among communities throughout Guatemala, and the march in the heart of Guatemala City (which I’ve attended since 2013). 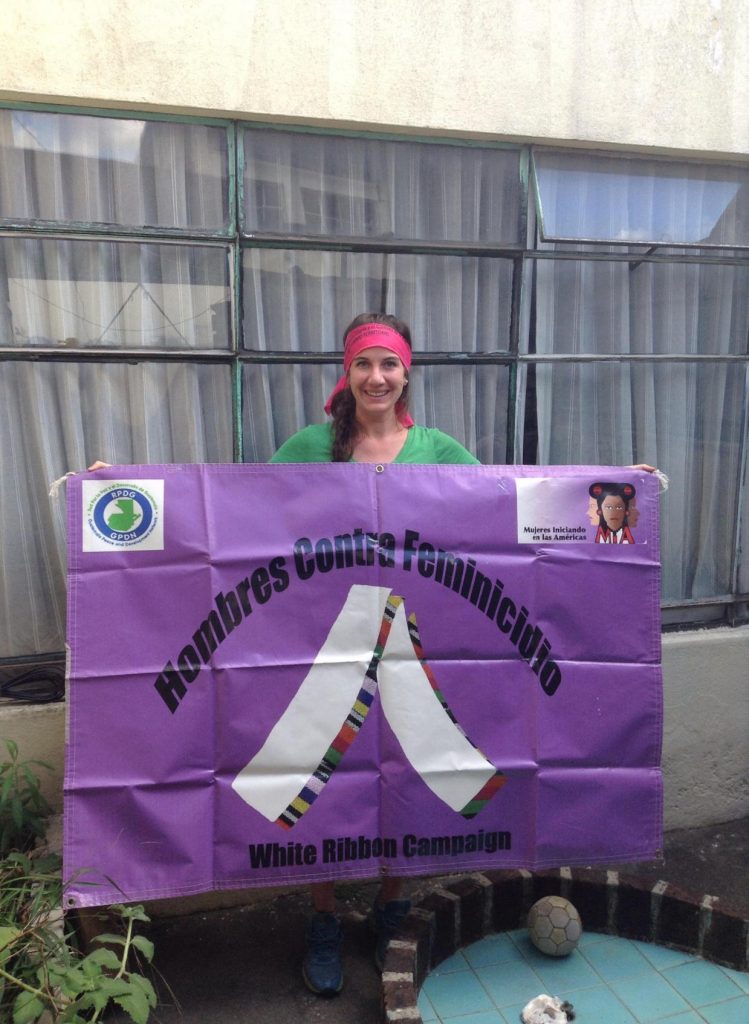 Me at the beginning of the march, excited to represent MIA alongside my sisters.

International Women’s Day has its origins in the Triangle Shirtwaist Factory Fire, which occurred in March 1911 in New York City, when a fire in the garment factory killed 146 and injured 71 others. The majority of the workers were immigrant women and they suffered grave labor abuses. If you don’t know much about this history, I STRONGLY encourage you to read up on it. =) 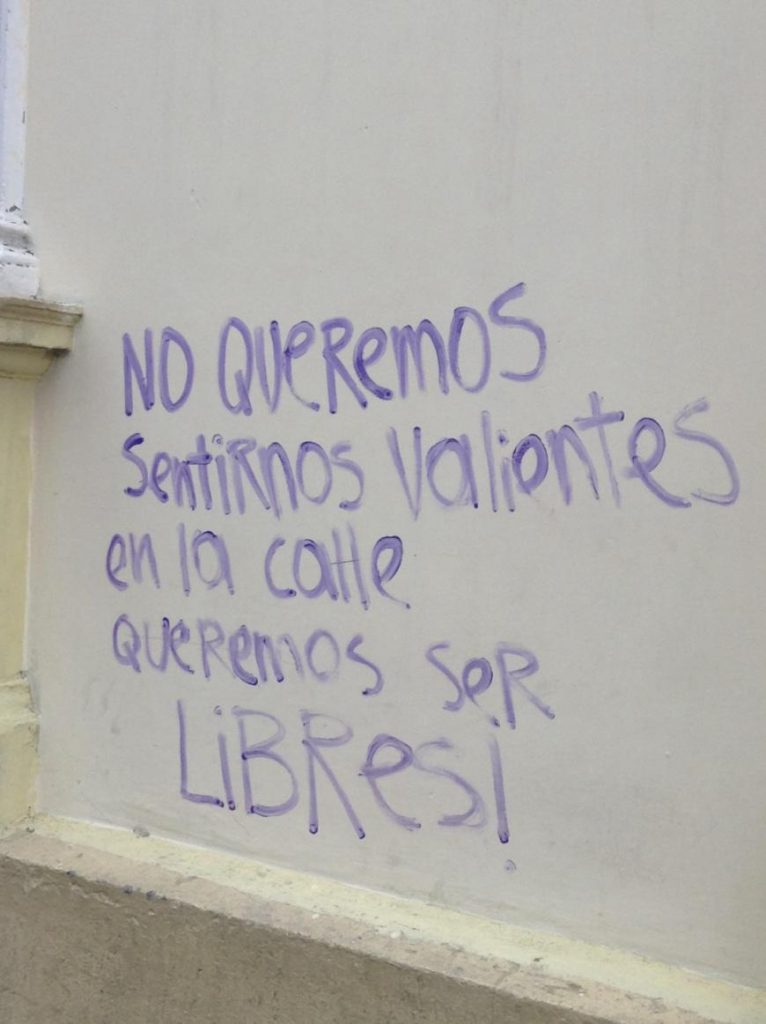 Graffiti: “We don’t want to feel brave on the streets, we want to be FREE!”

“Why do we need to have a date that is recognized internationally as Women’s Day?” you may ask. Well, valid question! Why do we particularly acknowledge women? Notice how I use the word ‘acknowledge’ as opposed to ‘celebrate.’ We women do NOT want to be given flowers or chocolate, or congratulated for simply having uteruses and breasts on this day (or on any day, really…). We want our rights as women to be guaranteed: the right to marry whom we want; the right to love whom we want; the right to decide whether we study; the right to have a job outside of the house, or work inside the house, the right to reproductive health and justice; the right to decide what we do with our bodies; the right to live FREE and SAFE and SECURELY, and without FEAR of men / masculinity / male figures / machismo / sexism / etc. At the heart of the matter, women want to be perceived and treated as equals. 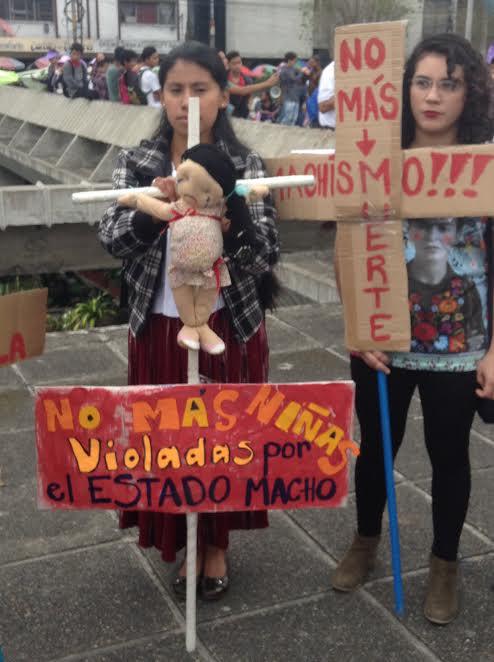 “No more sexual abuse of girls by the patriarchal state.”

“Well, if we are talking about equality here, why don’t we celebrate International Men’s Day?” you may ask. Well, astute observation, especially through the lens of MIA. You’re correct, men do suffer physical and emotional violence, as well as economic abuses and denial of education and threats to their life. In MIA, we are keenly aware of this and work to raise awareness about lesser-known, but just as serious, violence against men. However, MIA is also aware of the fact that the majority of abuses happen to girls and women, especially within the deeply-entrenched patriarchal culture in Guatemalan society. 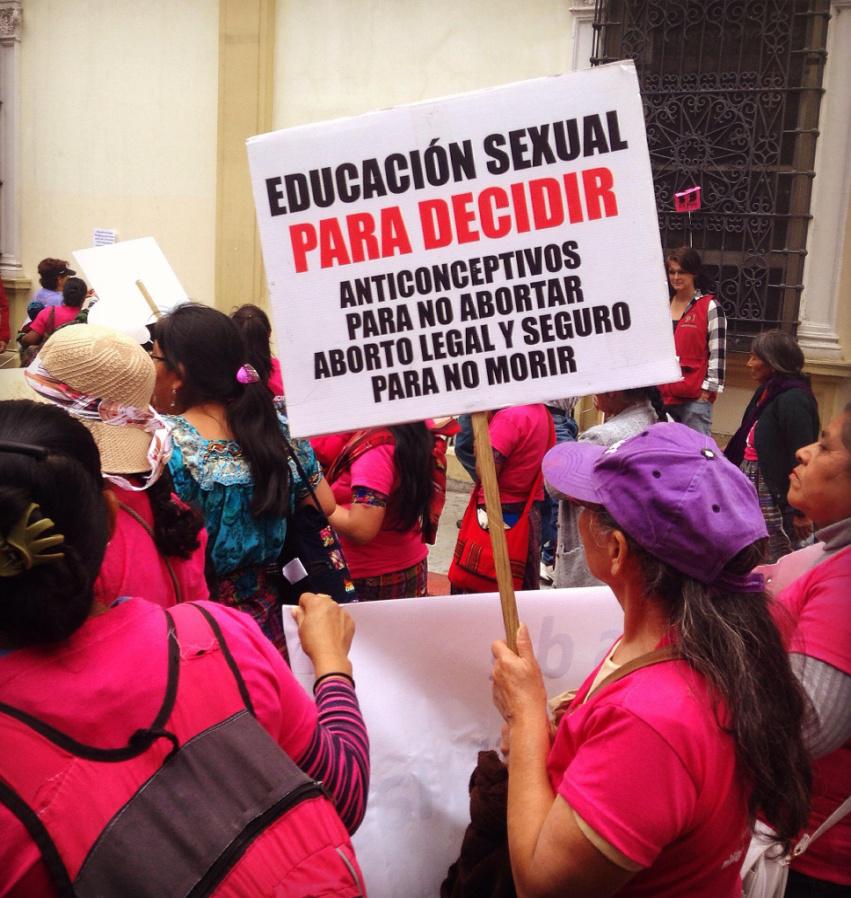 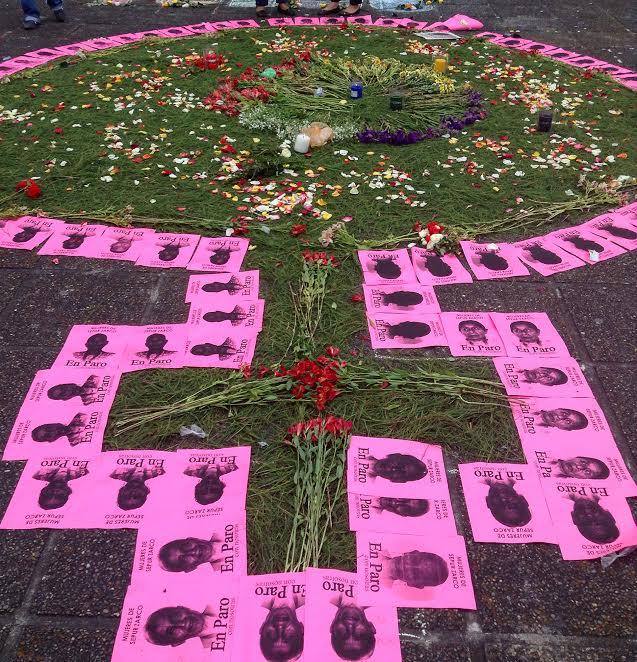 Only in resistance, together, can we dream about constructing a better Guatemalan society and a better world. 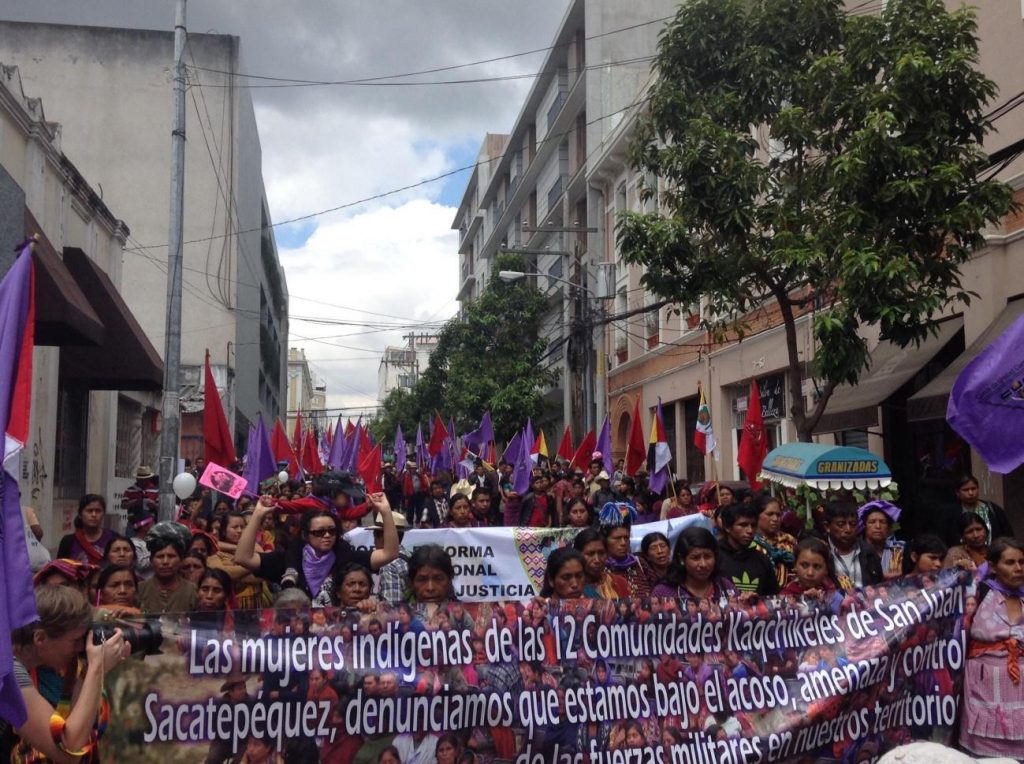 In Guatemala, rates of pregnancies among girls and adolescents are alarmingly high. Girls are allowed to be married without their consent. Domestic abuse is so commonplace that it is normalized. Sexual harassment on the street is rampant, and just a few weeks ago, a man was caught on one of the Transmetro buses (the safest in Guatemala City) ejaculating upon a woman passenger. Out of sheer luck, he was caught on camera, and captured by police, set to serve several years in jail. So Guatemalan women suffer disproportionately more abuses in everyday contexts in comparison to men, and THAT is why we need to appreciate how much we’ve achieved in securing equality and liberty for women, and recognize all the work that still needs to be done.

MIA, alongside thousands of other women and men from Guatemala and around the world, was fiercely proud to participate in the march. It is necessary that we stand firmly and in solidarity to speak out against the countless abuses against women and girls, and that we declare that we wish to be Agents of Change, or Agentes de Cambio, as we say in the Men Against Feminicide and New Masculinities diplomados. MIA strives to discuss and debate, make wholly visible, and raise awareness about gender
injustices and inequalities. 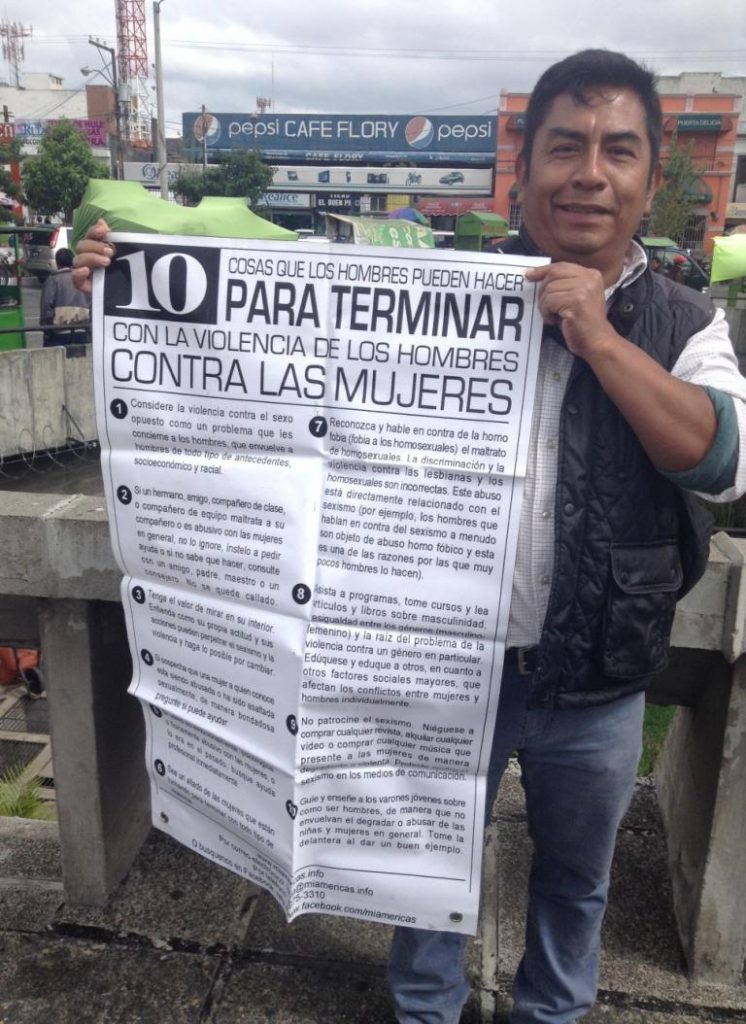 Cosme Caal, one of MIA’s male representatives, holds our “10 Things Men Can Do to Eradicate Violence Against Women” banner. 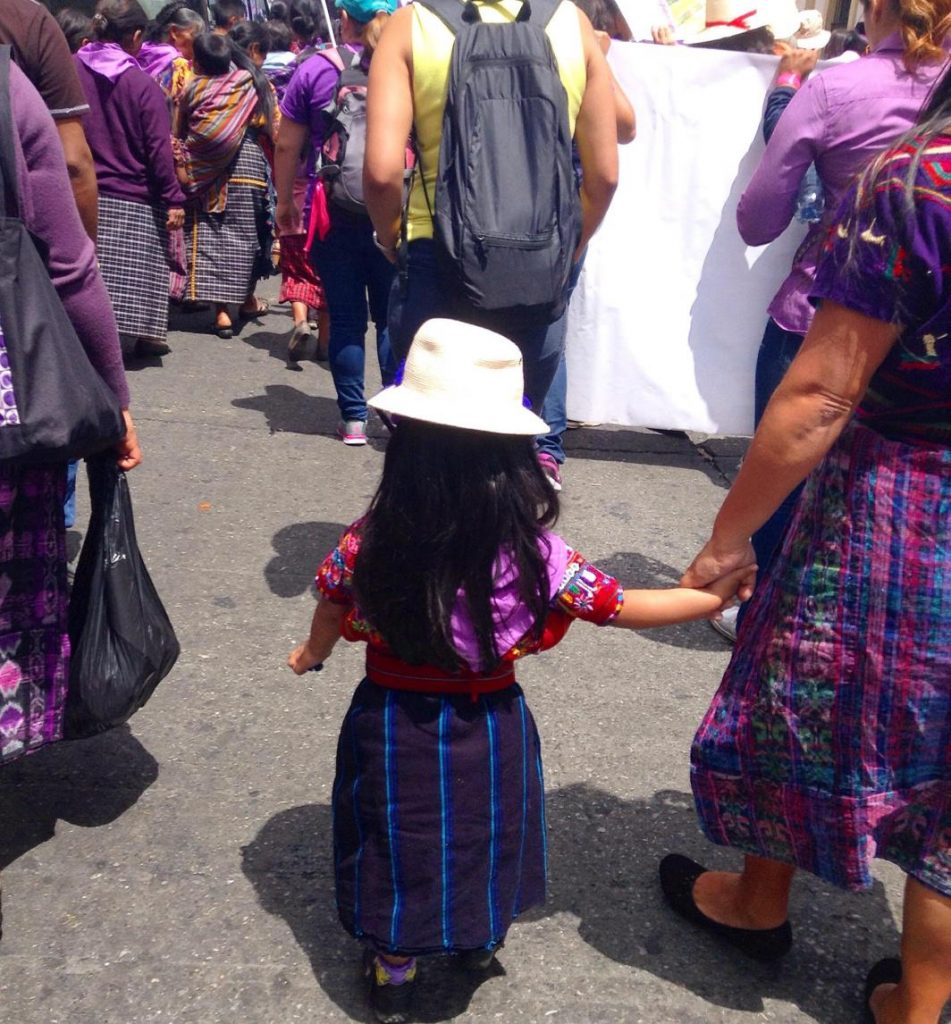